Daymond John is a New York Times Bestselling author and the CEO and founder of FUBU, the iconic global lifestyle brand that went on to have more than $6 billion in sales.  Resolved to expand his own brand, Daymond joined ABC’s iconic series, Shark Tank as one of their original cast members.  Now in their seventh season, “The People’s Shark” remains a staple on the two-time Emmy Award winning show that airs on Friday nights.  His commitment to entrepreneurship goes beyond his work with FUBU and television and has been celebrated on a global level.  In 2015, he was named a Presidential Ambassador for Global Entrepreneurship and was part of an exclusive group who joined the President and his staff at the Global Entrepreneur Summit in Kenya.

One of Daymond’s greatest accomplishments is his continued fight against dyslexia where he sits on the advisory board of Understood.org and works closely with the Yale Center for Dyslexia. Daymond has embraced his affliction allowing it to be a catalyst for his career as an author. This past January, his book The Power of Broke (Crown Publishing) was released and became an instant New York Times Bestseller.  Designed to inspire men and women of all ages and circumstances, The Power of Broke takes readers behind the scenes with country’s most celebrated entrepreneurs to show how starting a business from broke forces you to think more creatively, use your resources more efficiently, connect with your customers more authentically and market your ideas more imaginatively.  His two previous books, Display of Power and The Brand Within were National Bestsellers.

A recipient of more than thirty-five awards, including the Brandweek Marketer of the Year and Ernst & Young’s Master Entrepreneur of the Year, Daymond serves as CEO of the marketing firm Shark Branding which specializes in brand strategies, brand development, artist relations and marketing. Under Daymond’s leadership, Shark Branding has perfected the methods for ingraining companies, brands and products into the social consciousness including Capital One, Miller Lite, Gillette, Shopify and Infusionsoft.  Additionally, he continues to anchor the company’s celebrity brand management  division where he has worked with superstars such as Muhammad Ali, the Kardashians, Pitbull, Idris Elba, Lennox Lewis, Stan Lee and more. 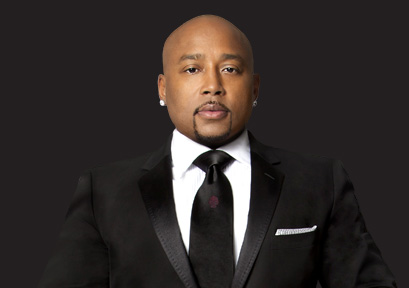